The Glock 48 was introduced roughly a year ago and since that time it has garnered a fair amount of attention and popularity. There’s nothing really novel about the G48;

it is essentially a single-stack G19 which, depending on how you look at it, makes some good sense or very little sense at all.

Since I make a habit of training with the G43 and carrying it when I’m at home, I’m familiar with the feel, carry, and manipulation of the Glock single-stack pistol platform.

While the G48 has a longer slide and taller grip, it also has a slightly thicker frame than the G43, so it both feels and shoots like a more substantial pistol than its predecessor.

As I am not an active warfighter or LEO, the only pistols I care about are everyday-carry pistols; mostly concealed-carry pistols. So I confess that I initially found it hard to justify owning this pistol,

since it is exactly the same length and height as the G19 and—even though it’s a single stack—it’s almost as thick as the G19. I have therefore long observed that if you can carry a G48, you can carry the much better option of the G19.

But on serious reflection I’ve come to believe that there are legitimate reasons to own and carry the G48. So, after having spent some time shooting this single-stack pistol, I’ll details some thoughts here you might consider. 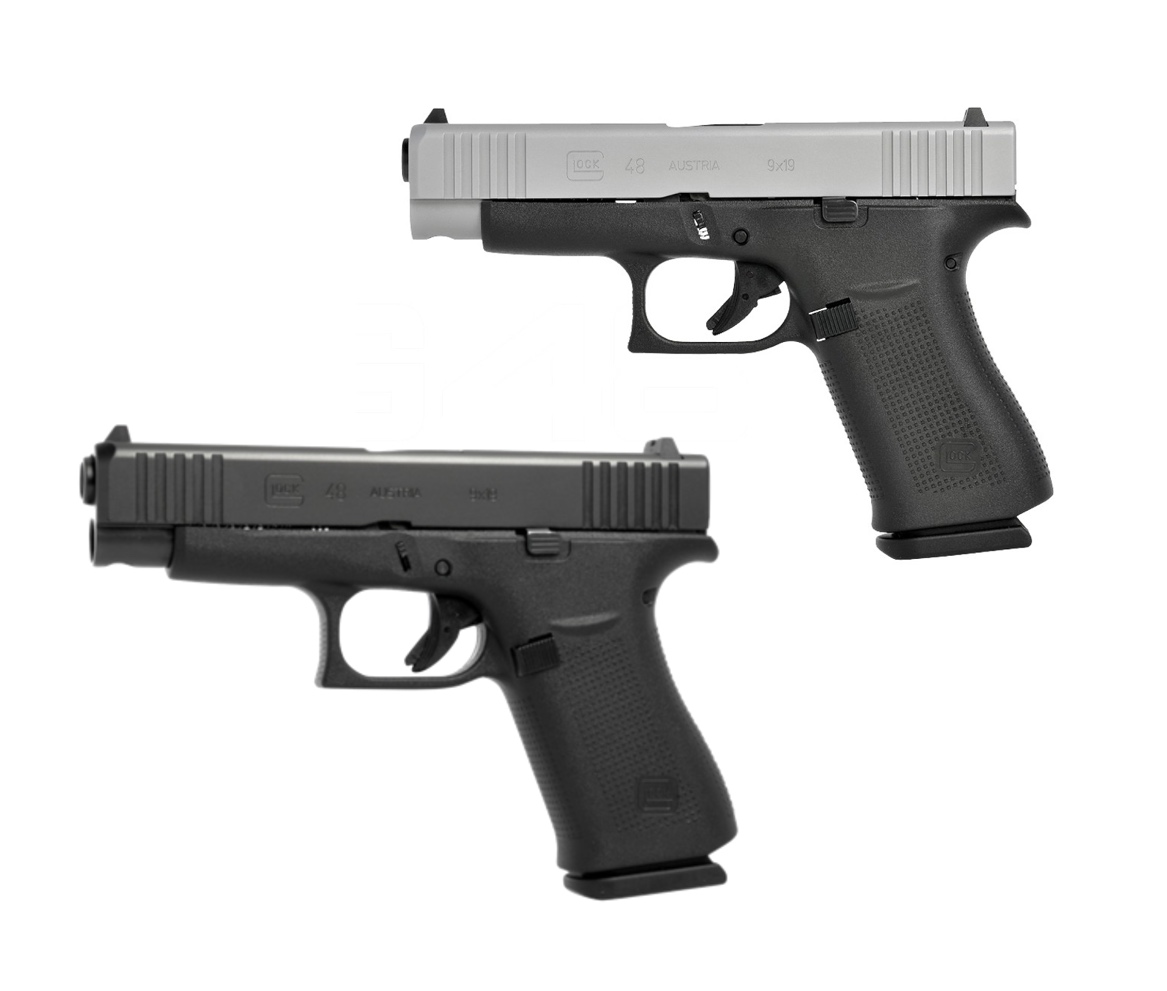 Why Consider the Glock 48?

The Glock 48 is a 9mm pistol that is made for concealed carry. It offers a slightly slimmer option to the G19 as a means to reduce the weight in/on your belt and/or for people with smaller hands who don’t like a double-stack grip.

Loaded, the weight savings vs. a Glock 19 is 5 ounces. The slimmer slide and frame makes the G48 slightly easier to conceal than the G19.

The reduction in frame width and the single-stack magazine means fewer rounds; the G48 magazine carries 10 rounds. That’s the same capacity as the smaller, but thicker G26. One might think of it as a lighter Commander-size 1911 that is actually reliable.

Other reasons you might consider the G48 is for when you want less weight and easier concealment, but still want a near-full-size grip and longer slide, and the easier manipulation and control that offers.

Yet another reason is that you want this smaller option, but still want the dead-simple mechanics and utter reliability of a Glock.

Being a polymer single-stack pistol, the G48 is somewhat snappier than similar sized double-stack pistols. The reduced slide and frame weight just allows you to feel more of that recoil.

But as I’m used to shooting plastic guns, I found it to be just fine and not at all difficult to manage. I do like the full grip on this pistol as compared to my G43. It lends comfort and confidence.

I’ve shot the G48 several times before, but for this review the pistol I used was a rental gun with several thousand rounds through it and the trigger was right at the spec weight of 5.5 pounds.

I’m a Glock shooter, so the trigger was familiar feeling and not really a factor in fast strings or accuracy. It was just “normal.”

I did take the opportunity to get in some fast manipulations and fast shooting strings with speed reloads while shooting it this time. I found these manipulations to be much easier than with my G43 and nearly as easy as with my G19.

It’s a Glock, so the controls are well placed and familiar for me.

The longer slide and sight radius than my G43 didn’t seem to factor much, as I don’t have much problem with the 43’s smaller sight radius, but the G48 does have that longer sight radius and some folks may find it easier to be accurate with.

The one thing I didn’t really like was the near lack of any texture at all on the grip. The texture on the G48 is the same as for the other smaller models, like the 43, 43x, and 42, which is to say it has barely any texture at all.

So why the G48 in a world with the Sig P365 and the Springfield Hellcat?

That would seem to be a pressing question when those two models have shaken up the handgun world with regard to size vs. capacity. The answers are surely subjective, but for one objective one that cannot be ignored.

Yes, those other two guns are smaller and yes have equal or better capacity than the G48. But a couple of benefits the G48 has over the other two is the easier and more comfortable to grip and the fact that it’s easier to draw from a holster and to manipulate/run in a gunfight.

Surely there are benefits those other pistols have over the G48, especially with regard to personal preference, but the fact remains that neither of them is a Glock…with widely available parts and accessories and proven reliability. These things matter a lot.

Something else to keep in mind is that there are some new magazines from Shield Arms that, without any extension, allow for 15 rounds in the standard G48-sized magazine. Though they’re obviously not OEM parts, they’re intriguing in theory.

The possibility exists that they’ll diminish the Glock’s famous reliability, but the benefit surely warrants further exploration (just be sure to replace the poly mag catch with a metal mag catch, else the steel mags will destroy the catch).

The G48 is a Glock. There is no new, unproven technology and the G48 will, like its brethren, surely go reliably for 100k rounds+ when properly maintained.

The slimmer frame and lighter overall package is more comfortable to carry and easier to conceal than similarly sized models. It shoots and manipulates easier like a medium-sized pistol.

Maintenance is easy (any part can be replaced in seconds) and replacement parts, replacement sights, and add-ons are always widely available. Because it’s a Glock, there are lots of holster models available for it.

Though slightly slimmer, the G48 is the same size as the G19, but with five fewer rounds so overall it seems like an unnecessary compromise. Since it’s a Glock it comes with those stupid polymer sights that must be replaced (at additional expense).

The trigger on the G48 tends to be heavier than you’re apt to find on larger Glock models. The texture is pretty crappy and must be amended somehow. It’s larger than some other carry pistols that have similar or better capacity.

So basically, the Glock 48 is a study in contrasts. There’s much to like about it yet it’s not too hard to find comparative criticisms; perhaps more so than any other pistol (save perhaps the Glock 43x!).

I’ll say then that if a Glock is what you prefer, it requires that you get it in your hands and put a few rounds downrange for yourself because…

There are no reviews yet.

Passionate about guns? Smith Gun Shop is the perfect place for you! Smith Gun shop is a marketplace of gun enthusiasts dedicated to sharing our affinity for guns. Here you can buy guns online, find guns for sell online, discover new guns, and get information about guns.

Your Cart is Empty